Sebastian was born on July 18, 2003. He was just perfect – a beautiful, healthy boy with good loud lungs.

For the first four years of Sebastian’s life, he developed as expected. He was very outgoing, sweet and kind. He loved T-ball, soccer and swimming.

He was a thriving young child. 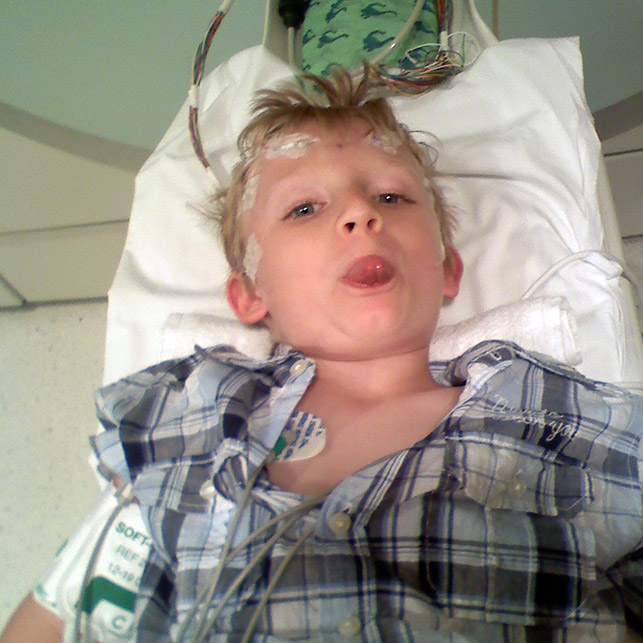 In October of 2007, Sebastian collapsed with his first seizure – a clonic tonic seizure mixed with partial complex seizure. He was hospitalized and then told to see his doctor. Ultimately, Sebastian was diagnosed with epilepsy, and he was prescribed anti-convulsant medication to control his seizures. Until doctors found the right medicine and dosage, Sebastian’s seizures grew more severe and frequent. He could not go more than about four days without a seizure.

Within the next year, we noticed some behavioral changes in Sebastian, but we thought it had to do more with the medication and the hardship of having seizures. He hated them, and he got hurt sometimes from falling during a seizure. We made many trips in an ambulance to the emergency room, where Sebastian was sewn back together time and time again. We were very scared and worried for our son.

At about six years old, we noticed that Sebastian was having difficulty reading. He was soon diagnosed with Retinitis Pigmentosa. The Chief of Ophthalmology at UCLA told us that Sebastian was losing his vision and eventually would go blind by the time he was in his teens.

We knew that both diagnoses must somehow be related due to the fact that we saw other functions beginning to decline. For example, Sebastian’s motor skills and cognitive abilities were also deteriorating. He began slurring his speech, falling behind in school, stumbling while walking and needing more and more help with even the most routine daily activities like dressing himself.

Ultimately, Sebastian underwent DNA testing at UCLA. He was diagnosed with Batten CLN8, a fatal and degenerative neurological disorder. A geneticist explained that this rare disorder had no cure and would leave Sebastian blind, immobile, cognitively impaired and ultimately dead by his late teens or twenties. We were absolutely devastated!

For several years, we searched the world for treatments or therapies to stop this disease. There was nothing. However, in 2016, we met the Gray family. They have two young daughters who suffer from Batten Disease CLN6, and they were instrumental in putting together a genetics team to develop a gene replacement therapy for children suffering from Batten CLN6. Their daughters both received the gene therapy eight months ago, and they are doing very well.

Because it is relatively new, the treatment and research are extremely costly, time consuming and not covered by insurance. Nevertheless, we are determined to raise the money necessary to treat Sebastian and other children diagnosed with Batten CLN8. No one should have to suffer like this.

HELP US REACH OUR GOAL OF RAISING $3.5 MILLION DOLLARS FOR RESEARCH AND GENE REPLACEMENT THERAPY TO CURE BATTEN DISEASE CLN8