The Hollywood couple who started a foundation to quickly fund research to find a cure for Batten Disease, which their two daughters are living with, says they are counting on a miracle now that the girls have received a breakthrough treatment that could save their lives.

Gordon Gray, the producer behind the movies “Miracle” and “Secretariat,” and his wife, Kristen, were told by doctors that their daughters,Charlotte, 5, and Gwenyth, 2, would not reach the age of 12 after both were diagnosed last year with the rare genetic illness that disrupts brain cells’ normal function, causing blindness, seizures, dementia and, ultimately, death.

According to the National Institute of Neurological Disorders and Stroke, the disease is so rare that it affects an estimated two to four out of every 100,000 children in the United States. Only a few children in the country are currently living with CLN6, the specific gene mutation that affects Charlotte and Gwenyth.

A few weeks ago, the girls received a potentially life-saving treatment. They became the first patients in an FDA-approved clinical trial at Nationwide Children’s Hospital in Columbus, Ohio.

Added her husband: “They’re missing the gene. They put the gene back in. It’s that simple.” 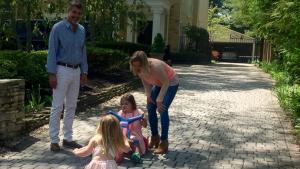 Charlotte –- who had lost considerable speech and gross motor ability as the disease progressed — has improved after the treatment, and her parents hope that she will continue to get better.

“She’s more engaged…Her vocabulary has increased a little bit,” Kristen said, noting that her daughter would need intensive therapies and education to essentially retrain her brain.

Gordon said Charlotte was “obsessed” with the animated film “Frozen.” She was lying in bed recently and repeated a line from on the film’s songs, Gordon said.

“That gives us a lot of hope, and it also shows us that she’s in there somewhere.”

Gwenyth was -– and remains -– mostly asymptomatic.

Last year the Grays started the Charlotte and Gwenyth Gray Foundation to Cure Batten Diseasein order to raise funds for what Gordon called “a solution” to the disease. The foundation has raised $3.5 million so far.

“We need a million more dollars just to cover our commitments through October,” Gordon said.

“When we started this with our girls, we made a commitment,” added Kristen. “It’s not just about our children. It’s about all these children.”

The original article can be viewed here